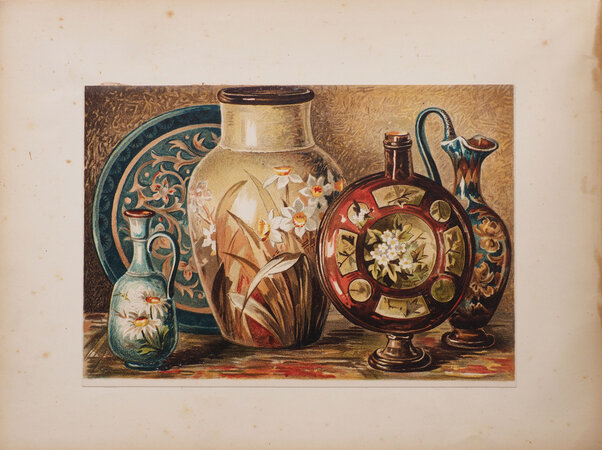 First edition in French of China Painting (also 1883) by Florence Lewis, one of the most successful and prolific artists working for the Lambeth Doulton potteries, who produced many thousands of designs for the pottery’s immense output exported throughout the British Empire and beyond. She was notably the decorator of what was (in 1893) the world’s largest vase, commissioned by the Indian Prince Gaekwar of Baroda from Doulton, exhibited at the Worlds Fair in Chicago.

Lewis ‘worked at the Minton Art Pottery Studio in London before joining Doulton’s new Art Pottery in Lambeth around 1874. Miss Lewis became supervisor of Doulton’s Faience department in 1880, training the younger woman artists, and in 1883 she wrote a book about china painting for amateur and professional students. Her work was admired by Queen Victoria, who bought a tea service decorated with primroses in 1887’ (Wiener Museum of Decorative Arts). Rare: Worldcat lists the Cambridge University copy only of the French translation.