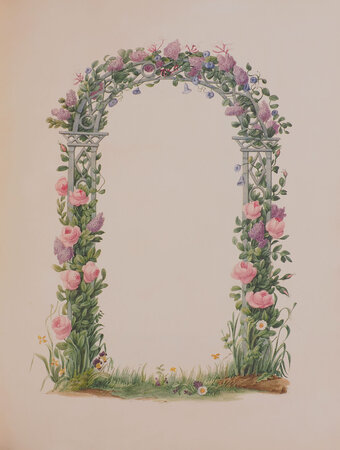 Small folio (315 × 230 mm), some sheets shorter, 84 leaves (all but one bound in), wove paper, each with a single watercolour design. A few stubs. Occasional brown offsets from the heaviest portions of colouring, but generally very clean. Early basket grain cloth. Slightly rubbed.

A series of anonymous watercolours, with numerous floral borders and vignettes, but also including 20 lovely compositions with books, journals, bundles of letters, music, a writing desk, a watercolour stand, inkwells and pocket books. The style is very much in the Empire taste, and the flower painting is exquisite. The volume appears to have been bound from loose sheets, many of which may have been destined as title pages for some uncompleted album project: a few have tiny marginal notes in ink giving a volume number and several are ruled in pencil for the addition of text.

Many bear the monogram ‘AD’ and some the name Délie, together with dedications ‘À toi’ or ‘À elle’, as though all were in some way dedications to a sweetheart or perhaps a child. There is a slightly morbid air to some, towards the end, which depict tombs, memorials and a deathbed scene. Among other subjects are a billiard room, a pet dog in a basket and two most inviting beds.

A modern manuscript note loosely inserted connects the album to Jules Lardin (1787-71), poet, musician and dilettante. Lardin is known to have created designs for tickets and publicity for concerts and to have made several albums, so this attribution is quite possible. The identity of ‘Délie’ is another question.