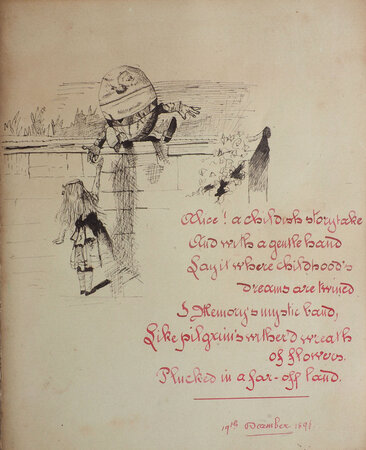 Juvenile adaptations of tableaux from Alice, performed as part of the celebrations for the Vigil of the Immaculate Conception, consisting of five scenes and including the characters of Alice herself, The Red and White Queens, Humpty Dumpty, the Hatter, the Hare, the Footman, Duchess and Cook, the Mock Turtle and the Gryphon.

It is not specified whether ‘The Grasshopper Theatre’ was at home or perhaps at a Catholic or convent school, but the whole performance was intended for a cast of three, plus a priest. It opened with the Terzetto, ‘Lift up thine Eyes’ from [Mendelssohn’s] Elijah, followed by a recitation, The Legend of the Infant Jesus serving at Mass (Mary E.S. Leathy) and Alice! (the latter occupying all but the first three pages). The players for Alice are denoted by three pseudonymns: ‘Altiora Peto’ (a motto: ‘I seek higher things’), ‘Don Quixote’ and ‘Pip’.

The cover bears a version of Tenniel’s illustration of Humpty Dumpty and the last stanza of ‘All in the Golden Afternoon’, the prefatory poem to Alice’s Adventures in Wonderland. ‘