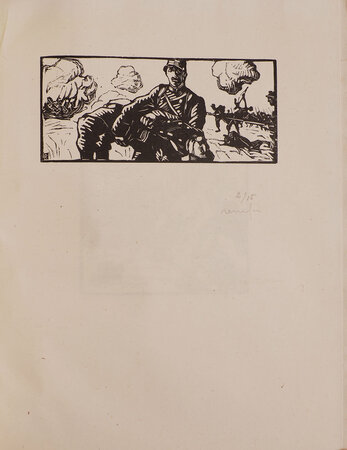 4to (230 × 175 mm), pp. 158, [2]. 21 illustrations, plus a suite of the 21 original numbered wood engravings on chine, all signed by the artist. Some foxing to extreme margins in text. Original yellow decorative wrappers and wrappers to the suite preserved, in contemporary marbled boards with orange morocco geometric onlays (minor wear).

First edition of the first of Fayard’s important Livre de Demain series, one of 15 copies with the illustrations in an additional suite on chine, signed. Benjamin’s Prix Goncourt novel of 1915 was written in hospital while recovering from injuries sustained at Verdun in September 1914 (and first published by Fayard). The wood engravings are among Renefer’s most evocative war illustrations.

Fayard’s Livres de Demain brought examples of the current revival in woodcut and wood engraving to a wide audience at a reasonable price. Accordingly, the illustrations of the regular volumes were printed in large numbers from phototype metal blocks made from the prints, with just 15 copies of each (as here) presented with an additional suite of the original woodcuts specially printed on fine paper. The series was very popular and ran for several years, with some titles reprinted in successive editions.