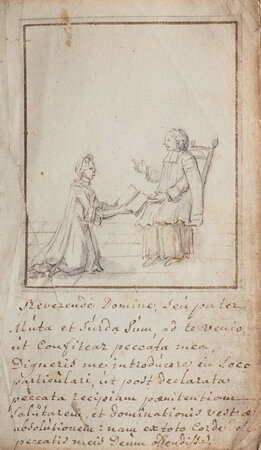 A pictorial aid to the sacrament of Confession, made for the use of a young girl or woman. It opens with an image of her kneeling before the priest: ‘Reverendo domino, seu pater muta et surda, ad te venio ut confitear peccata mea...’ There follows a series of representations of typical sins, with short captions in Latin, representing the potential sins to be confessed, including: distraction during the Eucharist, working on the Sabbath, missing confession, confession without repentance, disrespect to parents, anger, pride/vanity, hatred towards neighbours (for the period of an hour, a day, a week, a month or a year, emblematically depicted), arguing at games, gossiping, theft, lying, gluttony (’usque ad vomitum’), and two degrees of impure thought (general, and towards another outside marriage). Each emblem is a neat summation of the sin, using a variety of visual devices: distraction shown as curling lines rising from the head and terminating in frivolous curls; speech as an oscillating line, and the sins of the heart as a single red heart. At the end are three acts of contrition.

These emblems are typical of the pictorial culture of devotion found in contemporary Dutch catholic images and manuscripts, though we have never encountered a similar collection. The book is also typical of contemporary practical aids to confession, sometimes printed, designed to be taken into the confessional. This example is unusual for being specifically female.

The little book, evidently well-used, has been later reused as a notebook for household accounts, in Dutch, with dates up to around 1820.