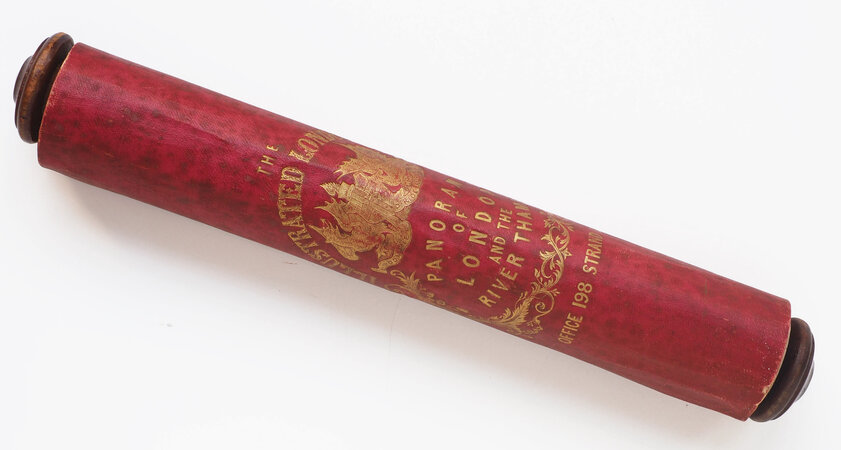 Hand-coloured wood engraved panorama on 2 sheets (310 × 2430 mm total), together with ‘Key’ on separate leaf, all mounted on original wooden roller with red morocco-grain cloth cover lettered in gilt (with adverts to verso). Short marginal tears and nicks, as usual, more frequent towards the opening,some neatly repaired, one longer tear near the beginning repaired with archival tissue, some vertical creasing. Overall, a very good example of a fragile item.

Given away with the Illustrated London News on January 11th 1845. Apparently printed from 12 adjacent woodblocks. Examples were also issued folded, or mounted on linen, and not all were coloured. For an example not laid to linen, this one is in a good state of repair. The long Panoramic view is from an aerial elevation looking North across the river: Buckingham Palace and the Palace of Westminster (the latter before the addition of Big Ben, of course) stand a the western end, while Greenwich Hospital marks its easterly extent. Between those two points, the river curves eastwards, teeming with contemporary ships and rivercraft and the streets of the northern riverbank presented in admirable detail, together with all the major landmarks of the city, as denoted by the key. Included are: Nelson’s Column, erected three years before; the short-lived Hungerford Suspension Bridge (1845-1862, when it was removed and the chain used on the Clifton Suspension Bridge over the Avon) and the Marble Arch used as the gateway to Buckingham Palace (it was re-erected in Hyde Park only in 1851).