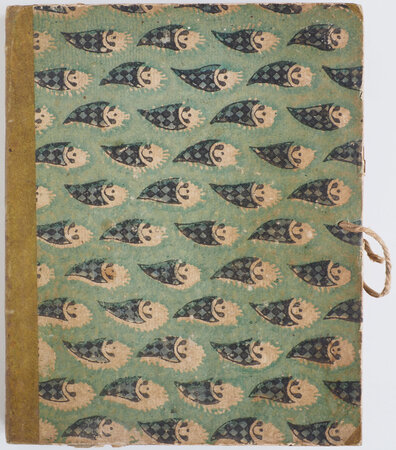 The commonplace book of a young woman, begun at the age of 14 in the convent of the Visitation (Nancy) and finished 5 years later. In Félicité’s words on the title-page: ‘Commencé en 1812 à la Visitation; fini en 1817 dans le monde’. Genelaogical records tell us that she was born on 10 February 1798 at Nancy and died at the age of 25 on 21 January 1823, at the age of 24, having given birth to a daughter, Cécile, in that month. She had married Charles Froment in 1821.

Her commonplace book, fully completed, is perhaps typical of an orthodox Catholic education of the post-Revolutionary era, beginning with extracts from pious and devotional works giving advice on conduct, motherhood and family life and preparing young girls for life outside the convent. It opens with a ‘Testament spirituel de Mad. de M***’ (d. 1797) and includes ‘Maximes d’une jeune Personne qui entre dans le Monde’ which provides a series of morsels of advice on: prudence and discretion, truth and sincerity, politesse, impartiality, moderation and so on. Later portions of the book include literary extracts, including verses from the popular journals of the day, a long extract (in French) from Fielding’s Sir Charles Grandisson giving the Italian catholic, Clementine della Poretta’s letter to the protestant Grandisson, and selections from Victor-Joseph Étienne de Jouy’s, satires on Parisian life: L’Ermite de la Chaussée d’Antin, published from 1811 to 1814 in the weekly Gazette de France.