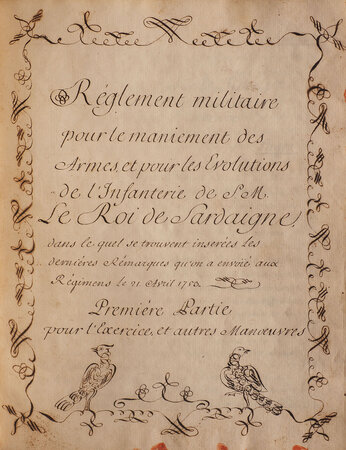 An extensive military manuscript, unpublished in print, consisting of order issues by the Savoyard minister of war, comte Bogin in 1752-3, setting out detailed procedures for ordering, drilling and manoeuvring in the infantry regiments of the armies of the King of Sardinia, Charles Emmanuel III. Presumably a contemporary copy of orders sent out to the regiments themselves, each part ends with the dated subscription (in copy) of Bogin at Turin. The manuscript is highly detailed, with 43 chapters across the two parts, covering rifle exercise (including bayonets), flag bearing, drilling, marching, battle formations and the conduct of firing in battle. The mid-eighteenth century Savoyard/Sardinian armies counted over 30 infantry regiments among their forces.

The island of Sardinia had been ceded in 1720 by the Habsburg and Bourbon claimants of the Spanish throne to the Duke of Savoy, Victor Amadeus II. The Savoyards united it with their historical possessions on the Italian mainland, while the monarchs of the House of Savoy ruled from their mainland capital of Turin, but styled themselves primarily with the royal title of Sardinia, ‘rois de Sardaigne’, as superior to their original lesser dignity as Dukes of Savoy.