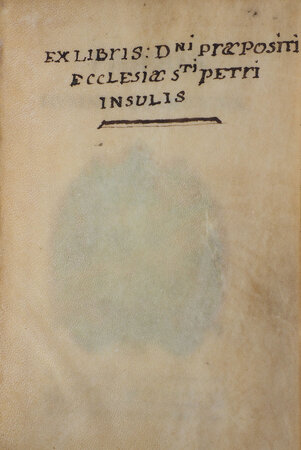 An interesting seventeenth-century manuscript of the Seven Penitential Psalms. The Latin psalms (6, 31, 37, 50, 101, 129, and 142) are presented in the ruled margins, while the central text is that of the French paraphrases attributed to the Abbé de Rancé (1626-1700), recent founder of the monastery of La Trappe. His paraphrases were included in his posthumous collected works, but we have been unable to find them in any pre-1700 publication, suggesting they circulated in manuscript only at the time this little manuscript was made.

The title bears an attractive coloured vignette illustrating a passage from psalm 140: ‘Que ma priére s’élève vers vous, comme la fumée de l’encens du matin: que l’élévation des mes mains vous soit aussi agréable que le sacrifice du soir’. The second title verso bears an attractive contemporary print, enclosed within red ruled lines and part of the intended design of the manuscript. The early inscription locates the manuscript with the provost or prior of the collegiate church of St Peter, Lille (’de insulis’), one of the majour foundations of the city, destroyed at the Revolution. It had become associated with the Lille cult of Notre-Dame des sept douleurs.