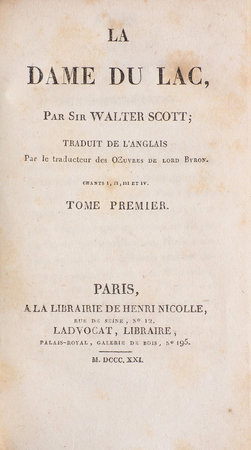 First edition in French of this translation (mainly in prose) of Scott’s narrative poem The Lady of the Lake (1810) which also contains Les Fiançailles de Trierman, a prose translation of Scott’s poem The Bridal of Trierman. It is by Amedée Pichot, and was preceded by a novelised treatment of the poem by Elisabeth le Bon (1813). Pichot is a significant figure in the translation of English works into French―in the course of his long career he translated Byron, Dickens, Sheridan, Thackeray and Lytton. The first volume contains a publisher’s statement disavowing a spurious work entitled Le Chateau de Pontefract which had recently appeared in Paris under Scott’s name. In common with most of the Scott titles first published in French in the 1820s, the first edition of La Dame du Lac was to form part of the grwoing ‘complete works’ series and contains half-titles marked Oeuvres complètes Rare: Worldcat lists copies at Texas only outside continental Europe. Jisc/Libraryhub (formerly COPAC) locates no British copies.