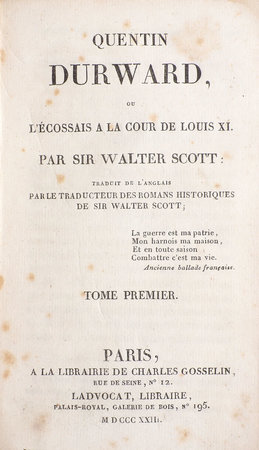 First edition in French of ‘the most influential’ of all Scott’s novels in France (Dargan), the tale of a Scottish archer in the service of the French King Louis XI (1423–1483). Issued separately, it also formed vols 69-72 of Oeuvres complètes de Walter Scott. Scott experience uncommon success in France, where his novels inspired a host of romantic and medievalist admirers (Hugo, Delavigne and Balzac among them). Quentin Durward, in particular, helped rekindle among novelists an interest in French history and the era of Louis XI, and Scott’s gothicism is rightly credited as one of the origins of a movement for the conservation and restoration of French national monuments culminating in the work of Viollet-le-duc.

The translations (usually by Defaucompret) were approved by Scott and appeared almost simultaneously with the British editions, with Cadell delivering advance sheets to the French publishers. E. Preston Dargan, ‘Scott and the French Romantics’, PMLA, Vol. 49, No. 2 (Jun 1934), 17 (May 31) and p. 605 ff.; Garside, Raven and Schöwerling, The English Novel 1770-1829, 1823: 74. For all their celebrity, the French editions are rare aoutside Europe: OCLC lists copies at NLS, Aberdeen and University of Toronto only outside continental Europe.