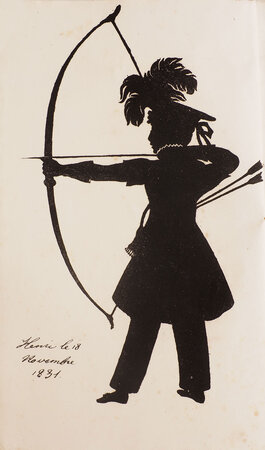 First edition. An account of the author’s ‘pilgrimage’ to the Palace of Holyrood in Edinburgh, where French monarch Charles X had taken refuge (for the second time) following his deposition by the July Revolution in 1830. The object of his pilgrimage was not so much Charles himself, but his young nephew Henri, son of the Duke and Duchess de Berri, named regent of French in exile. A detailed report of this extraordinary young man is given, together with the striking silhouette portrait. The ‘Récit’ of the meeting is followed by various reflections on the author’s return journey through London, and then by a ‘rêve’ in which he dreams of a return to Paris and restoration of the monarchy under a young king Henri.