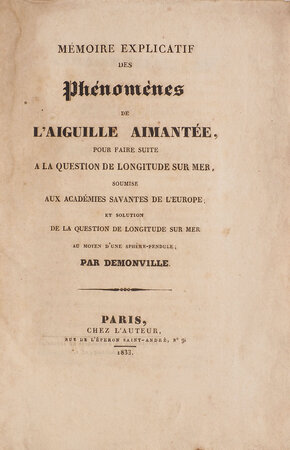 First separate edition, with a large folding plate depicting a planisphere built to desmonstrate the author’s alternative astronomical system.
Demonville had been a printer (son of a printer to the Académie française) but diversified as a maker of globes and scientific instruments after losing his licence to print in Paris. In the year of publication, he acquired notoriety as an astronomical crank who denied the systems of Copernicus, Galileo, Newton, Halley and Herschel. His planispehere demonstrates his alternative cosmos ― with the earth, the sun and the moon the only genuine astronomical bodies (the moon 250 leagues from the earth and the sun just 1500), the earth not rotating (merely ‘nodding’ a little over the course of a year), the stars affixed to a crystalline sphere and the planets with no corporeal existence. Demonville hawked his system around Paris and London (with both his books and instruments), even obtaining an audience with William III, who had to ask the Royal Society for their opinion. With his longitude pamphlets, such as ours, he sought to obtain prizes from the Societies of Paris and London but he was pilloried in the press and his ideas were roundly dismissed.
This pamphlet though here separately issued (with its own title-page and errata leaf forming a wrapper) was also issued simultaneously as a suite to the author’s Question de longitude sur mer (1833). The final 4 leaves are adverts for the author’s controversial mechanical planispheres, one of which is illustrated in the very large folding plate. Both issues rare.