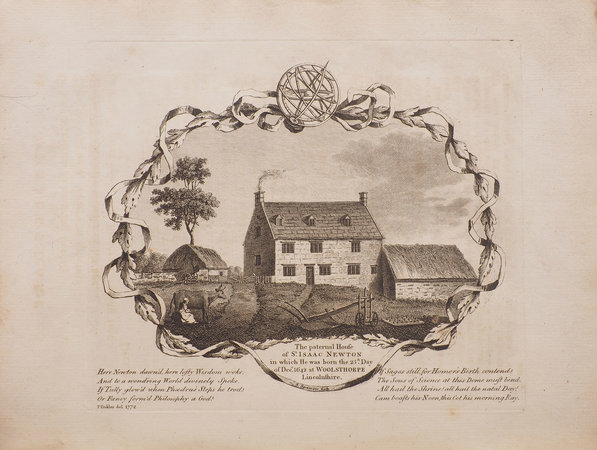 Third edition (first 1771). Maude’s best-known work and a very popular poem, according to Aubin, who quotes from it extensively. The preface contains ‘his well considered observations on the nature of descriptive poetry... Like Crabbe, Maude fully realizes that the English bumpkin is too greatly harassed by cares to be the ideal poetic rustic.’ Jackson, p. 84. It occupies a curious place in the canon of works about Isaac Newton: apart from the plate depicting Newton’s paternal home, it represents the sole source for an oft-repeated anecdote of Newton’s rebuke to his pet dog Diamond (’Oh Diamond! Diamond! thou little knowest the mischief done’) for upsetting a candle and burning his papers (Gjertsen, The Newton Handbook, p. 177). The anecdote is almost certainly apocryphal. Aubin, pp. 367; Jackson p, 84.