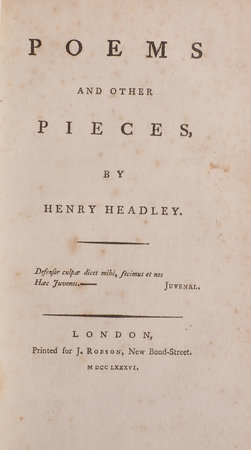 First and only edition. The poet Henry Headley (1765–1788) matriculated at Trinity College, Oxford in 1782, and immediately became close to the poet William Bowles, and William Benwell, the classicist (Oxford DNB). Around this time, while visiting friends in Norfolk, he fell deeply in love with a woman named Myra (i.e., of the poem ‘To Myra’ in the present volume), but was left heartbroken after she had been ‘prevailed on to marry a rival … He quitted Oxford in 1785, it is said in an agony of disappointment, and without any communication with his friends’ (ibid.). This highly emotional incident prompted him to hastily and anonymously publish his book of poetry, Fugitive Pieces (1785), containing poems he had written at the age of nineteen, and ‘had previously appeared in print. They were reissued with additions in 1786 as Poems and Other Pieces by Henry Headley [the present volume], and the book was inscribed to Dr P—r (Parr). These poems were subsequently included in R. A. Davenport’s British Poets (vol. 73) and in Park’s Poets (vol. 41)’ (ibid.). The present work, he tells the reader, was conceived in a moment of regret for originally publishing many of the poems so hastily with errors: ‘The majority of the following Pieces, which have been before much too hastily, and perhaps undeservedly, made public, are here collected and republished, solely for the sake of correcting many of their imperfections, and of rendering them (if possible) somewhat less exceptionable’ (‘To the Reader’). Jackson, p. 126.