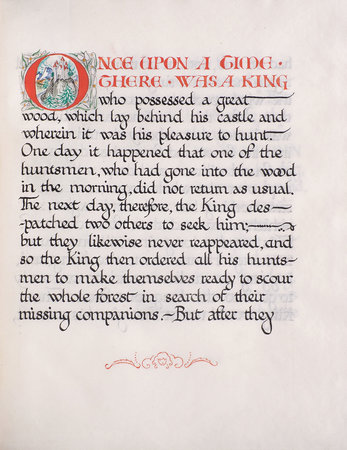 Grimm’s Iron John, the classic tale of male rights-of-passage, is here rendered in calligraphy and a series of fine historiated initials by a young Maria Elizabeth Passini. The style is medievalist, paying homage to the chivalric manuscripts of an earlier age, but is unmistakably of the 1930s. We have been unable to find any other examples of manuscripts by Passini, and it is likely to have been a student project. Her later works were figurative drawing and paintings, often portraits and graphic designs for commercial clients.

Elizabeth Passini was born in Innsbruck in 1911 into a family of notable Austrian painters and emigrated to England in the late 1920s where she studied at the Slade School. She also studied at the Munich Academy of Fine Arts, the Central School and St Martins. She was a member of the Pastel Society, Contemporary Portrait Society and a founder member of the Hampstead Artists Council. She was a key member of the Hampstead art scene and regularly took part in the Open Air Exhibitions in Heath Street there from the late 1940s and, later on, the Royal Free Hospital Exhibitions. She taught at the Camden Arts Centre for many years. She died in 1995. Burgh House & Hampstead Museum holds a number of her works.