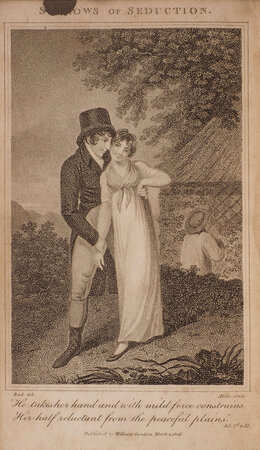 [MACKENZIE, ?William]. ~ The Sorrows of Seduction, in eight Delineations: with other Poems … Third Edition, considerably improved. London: Printed for Vernor, Hood, and Sharpe … and W. Gordon … 1810.

12mo (157 × 97 mm), pp. viii, [9]–159, [1], with stipple-engraved frontispiece by Alais after Buck and one additional plate by Allen after Corbould; some light browning, small ink stain to upper margin of frontispiece, bleeding onto the title-page, and upper margin of second plate, small chip to title, not affecting text; contemporary half calf, worn, joints cracked, upper board all but loose, surface wear to boards, head and tail of spine chipped.

Third edition. with new illustrations. Originally divided into six delineations (1805), two were added in the second edition (1806). Jackson attributes the present work to one William Mackenzie, though it was advertised in the Monthly Magazine as being by a J. Mackenzie in 1817. Reviews were generally lukewarm, the Critical Review dismissing it as a bit of female fluff: ‘Its title its passport, this poem will probably form part of the furniture of many a lady’s dressing-room. With that let the author be content.’ As if to further this point, the only positive review we were able to locate came from The Lady’s Monthly Museum, which stated that the little volume ‘exhibits great elegance of taste, and warmth of feeling … and has many pathetic and beautiful passages.’ Jackson, p. 345. COPAC lists 4 copies (Bodley, BL, Cambridge, NLS), to which WorldCat adds 3 (McMaster, NYPL, Toronto).