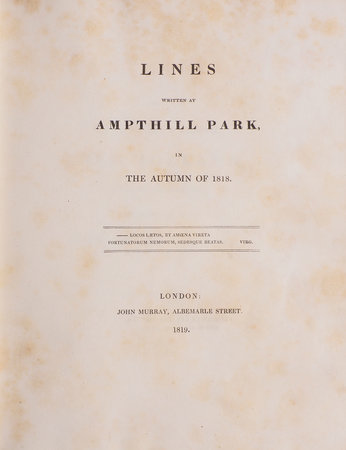 Two works bound together, 4to (222 × 170 mm), pp. 46, [2]; 94, [2], complete with half-titles. Pale foxing (slightly heavier towards beginning and end). Contemporary half calf, panelled spine in gilt and blind, by L. Wilson, Macclesfield with his yellow ticket. Rubbed, lower joint starting, and with a little further wear at extremities. Armorial bookplate of Edward Davenport.

First editions. ‘In 1819 Luttrell published some graceful, if rather colourless, elegiacs entitled Lines Written at Ampthill Park in the Autumn of 1818, and dedicated to Henry, Lord Holland’ (Oxford DNB). Rogers’s Human Life has been compared to Byron: ‘Detailing various scenes from cradle to grave in the life of a gentleman from a background similar to Rogers’s own, the poem gave Rogers the opportunity to confront his own sufferings in a vicarious form. He never married, and there is a wistfulness in the delineation of domestic scenes’. (Oxford DNB). Jackson, p. 444.