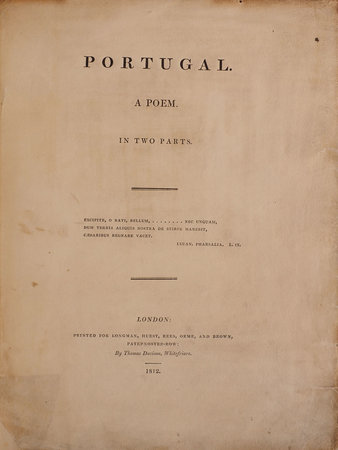 First edition of this patriotic poem on the Battle of Bussaco, 1810, in which the French were defeated by Anglo-Portuguese forces under Wellington (to whom the poem is dedicated). ‘The following poem was suggested by an evenings excursion, during the Autumn of 1810, upon the hills of Cintra, in which spot indeed many of the lines themselves were written’. George Grenville (1788-1850) of Carlanstown, Co. Westmeath became lord high commissioner of the Ionian Islands and was prominent in the cause of anti-slavery, parliamentary reform, and religious liberty. Jackson, Annals of English Verse, p. 362.