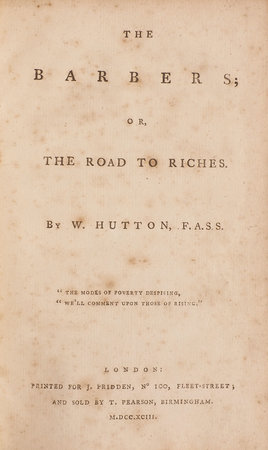 Rare first edition of an earnest (if critically slated) poem presumably reflecting the author’s own rags-to-riches story. Hutton (1723–1815) is credited with opening the first circulating library in Birmingham (Oxford DNB), and was born into abject poverty:

‘This respectable veteran, who was literally the artificer of his own ample fortune … was sent, before he was five years old, to a poor day-school … and when he has attained his seventh year, was placed in the silk-mills, where he passed a miserable period of seven years. Having lost his mother, and been cruelly treated by his master, he formed the resolution of seeking his fortune … He had now acquired an inclination for reading; and, having met with three volumes of the Gentleman’s Magazine, contrived, in an awkward manner, to bind them himself – a profession to which he afterwards applied himself with some success. He opened a shop at Southwell, at the rent of 20s. a year, with about twenty-shillings-worth of books … He soon after purchased the refuse of a Dissenting minister’s library; and from that period his affairs began to wear a pleasant and promising aspect’ (The Gentleman’s Magazine, Oct. 1815).

Hutton went on to run a successful paper warehouse in Birmingham, which sustained him for the rest of his life and allowed him to publish some of his own writing, including his well-regarded History of Birmingham (1782). Jackson, p. 189 (erroneously giving the dated as ‘1794’); Johnson 479 (a Birmingham edition dated ‘1793’, but ESTC shows that this is in fact a nineteenth-century reprint); not in Sabin, though there are a number of references to America (including ‘that Fabius, Washington’). ESTC locates 4 copies only (Birmingham Central Libraries, Birmingham University, British Library, Library of Congress).