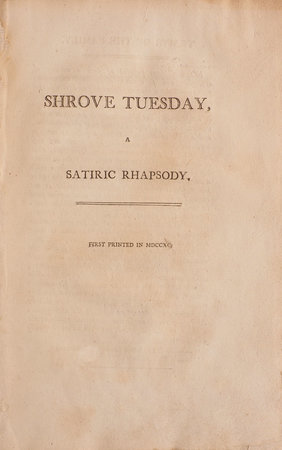 Second edition of John Williams’s Shrove Tuesday (1791; 4 copies in ESTC), an anti-clerical and anti-aristocratic satirical poem emblematic of his controversial style (Oxford DNB). It was also issued as part of his Cabinet of Miscellanies (1794?).
The publisher has, perhaps wisely, removed Williams’ preface for the second edition, as it ruffled feathers among reviewers when it was first published: ‘…those authors who are resolved to acquire a fugitive fame independent of talents, send a copy of their works to the Editor of the Review with a guinea, and then they may either write the criticism themselves (which is done in nine instances out of ten) or received more praise from the honest editor for their doggerel nonsense, than Virgil would think even just if describing his incomparable Aeneid’ (p. iv, ‘Declaratory Dedication’ of the 1791 edition). The Critical Review, for its part, certainly took offense, referring to the poem as ‘incoherent rhapsody and incongruent metaphor’ (April 1792). Jackson, p. 194 (first edition).