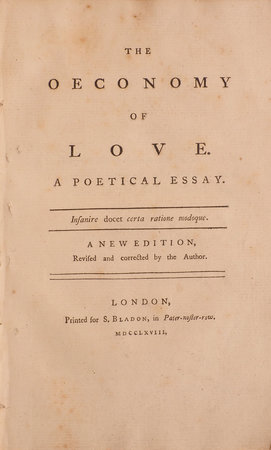 [ARMSTRONG, John]. ~ The Oeconomy of Love. A poetry Essay … A new Edition, revised and corrected by the Author. London, Printed for S. Bladon … 1768.

FIRST PRINTING of the ‘revised and corrected’ edition of the physician and poet John Armstrong’s ‘glowingly explicit sex manual in blank verse’, here newly excised of some of the racier passages, including an excerpt describing a wet dream (Oxford DNB).

The Oeconomy of Love, first published in 1736, was Armstrong’s most frequently reprinted work in the eighteenth century, and was ‘chiefly intended as a Parody upon some of the didactic Poets; and, that it might be still the more ludicrous, the Author in some Places affected the stately Language of Milton’ (p. [5], author’s advertisement). Armstrong ‘had a reputation for drinking, swearing, and indolence; he was habitually querulous and sarcastic, but discerning friends, including Thomson, Smollett, and Hume, found his melancholy pleasing. In his last decade he mellowed: Fanny Burney, in 1772, thought him “very droll”, “an amazing old man”’ (ibid.). The Bowyer ledgers record that 750 copies were printed (Maslen & Lancaster 4699). ESTC lists 7 only (Cambridge, NLS, V&A in the UK).