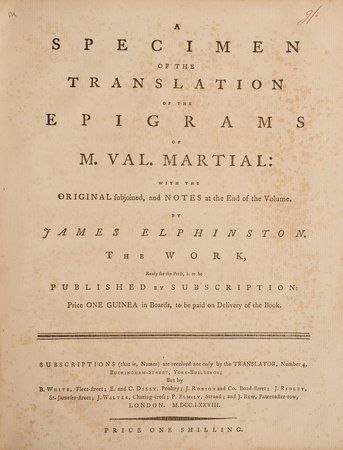 ELPHINSTONE, James. MARTIAL ~ MARTIAL. A Specimen of the Translation of the Epigrams of M. Val. Martial: with the Original subjoined, and Notes at the End of the Volume. By James Elphinston … Subscriptions (that is, Names) are received not only by the Translator … but by B. White … E. and C. Dilly … J. Robson and Co. … J. Ridley … J. Walter … P. Elmsly … J. Bew … London. 1778.

First edition, scarce. James Elphinston (1721–1809) was an educationist and advocate of spelling reform who published several works on the pedagogy of modern languages. The present publication, translating a small number of Martial’s epigrams, served as a specimen for subscribers, in the hopes that in time the subscription list would grow large enough to support a full translation: ‘The whole, thus prepared for the public, waits only the completion of that catalogue, which would already do honor to any literary enterprise, and to this announces immortality. The sooner therefore the remaining names, and the number each commands, are ascertained, the sooner will every wish be gratified; and justice of every kind be done to the Encouragers, as well as to the Undertaker: in whose hands may meantime be seen, the whole, or any part, of the Manuscript’ (Preface). The full work was finally published in 1782 but was poorly received by critics (Oxford DNB). His efforts to devise a completely reformed system of spelling in the 1780s would earn him recognition among twentieth-century philologists, but very few in his own day; Benjamin Franklin was, however, a notable exception. Not in Jackson. ESTC lists 8 copies (BL, Glasgow, NLS (2 copies), Bodleian, Cornell, Library Company of Philadelphia, Illinois).