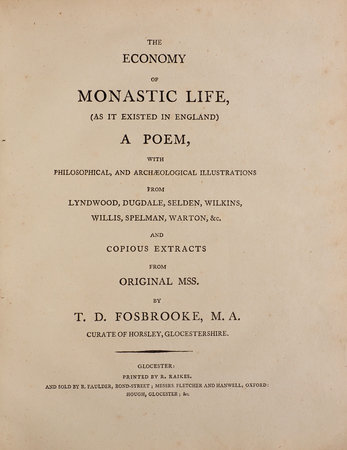 First edition of Fosbroke’s poem, praised for being ‘the fruit of a great deal of curious research’ (Critical Review) into English monasticism. In his preface, Fosbrooke (he later changed it to ‘Fosbroke’) stresses that his aim is not ‘to reconcile all the different orders’, but rather to highlight ‘that there must be points in which they all agree … By describing these and adding such ceremonial particulars, as he could most conveniently procure, the Author hopes he has been able to convey a general idea of the nature of a Monastic Life’ (Preface).

A nice piece of provincial typography, the work is dedicated to Edward Jenner (who subscribed for three copies); there are eight other Jenners in the subscribers’ list. Jackson, p. 207; Johnson 337.