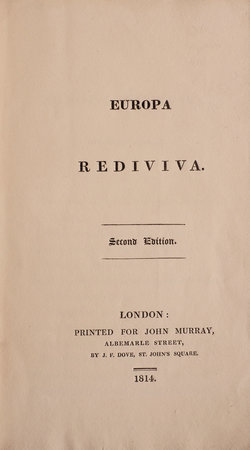 Second edition; we have been unable to locate a copy of the first. Europa rediviva is a sweeping view of Europe as a triumphant ‘brotherhood in war–one family, in peace!’ (p. 19). Eton-educated Henry Gally Knight (1786–1846) published a number of poems in the 1810s to generally positive reviews, but did not garner acclaim in earnest until his Architectural Tour in Normandy (1836), which established his reputation as an well-regarded, if amateur, antiquarian (Oxford DNB). He proceeded to publish several architectural studies and served as an MP for a short period of time. Not in Jackson. COPAC lists 1 copy only (BL), to which WorldCat adds 2 (UCLA, Wake Forest).