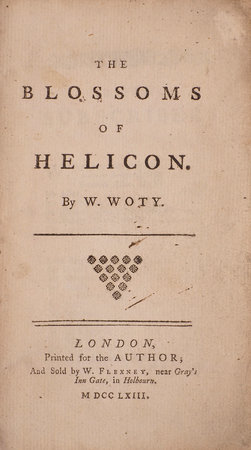 WOTY, William. ~ The Blossoms of Helicon. London, Printed for the Author; and Sold by W. Flexney … 1763.

First edition. William Woty (c.1732–1791) was a jobbing poet and literary editor with friends in high places: ‘Samuel Johnson, James Boswell, Tobias Smollett, and David Garrick are listed among the names of the many subscribers to [his] first collections, and Woty apparently had a strong interest in the London theatre … Later Woty published The Stage: a Poetical Epistle to a Friend (1780) and two short dramatic pieces: The Country Gentlemen, or, The Choice Spirits (1786) and The Ambitious Widow: a Comic Entertainment (1789)’ (Oxford DNB).