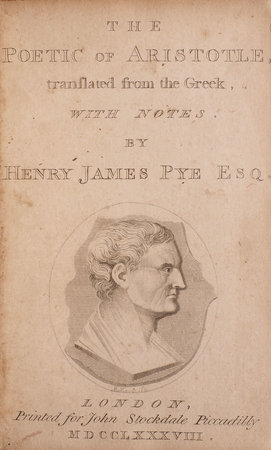 PYE, Henry James. ~ The Poetic of Aristotle, translated from the Greek, with Notes … London: for John Stockdale 1788.

First edition: it was followed by a bulky Commentary on the same in 1792. Pye’s motivation for the present translation was to increase access to the work throughout the English-speaking world: ‘Though England has produced many valuable editions of Aristotle’s Poetic, and many ingenious commentators on that inestimable work, yet they have all been confined to the learned languages; and while our neighbours on the continent abound in translations, it is almost entirely shut up from the mere English reader’ (Preface).
Pye (1745–1813) was a self-described ‘rhymer for life’ whose work on Aristotle was widely viewed as ‘original, shrewd, and learned’ (Oxford DNB). He was made poet laureate in 1790, though has unfortunately been the object of some derision from his peers; as his successor, Robert Southey, once famously quipped, ‘I have been rhyming as doggedly and dully as if my name had been Henry James Pye.’