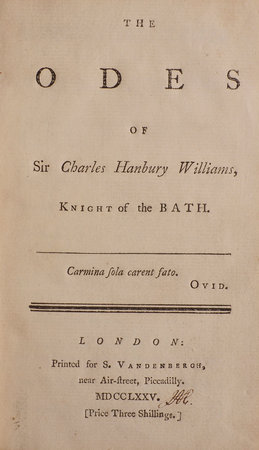 Second edition (first 1768) of the collected odes of Sir Charles Hanbury Williams, positively skewered by the Monthly Review as ‘a very bad and incorrect edition of the witty Knight’s lewd poems – The Publisher has, moreover, paid so little regard to decency in his selection, that he ought, by an order of the police, to be deprived of the use and comfort of breeches, during the remainder of his life.’ This kind of review, unfortunately, was not an anomaly for Williams: ‘Much of his poetry was judged obscene, even by his contemporaries, and his reputation has reflected that judgement … Influenced by Pope, whose early poetry especially he admired, Williams had neither the conciseness nor the subtlety of Pope’ (Oxford DNB).

‘Lovely Peggy’ serves as an excellent example of Williams’s extraordinary lack of poetic subtlety: ‘Were she array’d in rustic weed, / With her the bleating flocks I’d feed, / And pipe upon mine oaten reed, / To please my lovely Peggy’ (p. 118). Williams had a well-documented and particularly vicious case of syphilis, so it is probably safe to say that he did, indeed, enjoy piping on his oaten reed, though we will join reviewers in wishing he had kept his reed to himself. Jackson, p. 39.