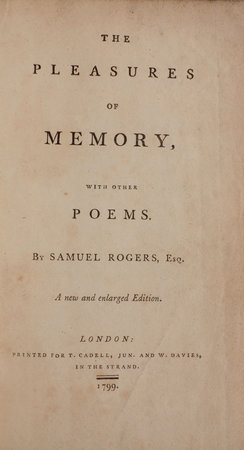 ROGERS, Samuel. ~ The Pleasures of Memory, with other Poems … A new and enlarged Edition. London: Printed for T. Cadell … 1799.

Small 8vo (154 × 93 mm), pp. [6], 188, with 4 engraved plates (one each by Heath and Neagle after Stothard, one each by Heath and Neagle after Westall); some light browning, a small amount of worming and soiling to gutter between B5 and B6, not affecting text; early nineteenth-century half vellum, soiled, smooth spine gilt in compartments with black calf lettering-pieces (a little chipped), rubbed with some dust soiling, over-marbled endpapers (originally a chart of charges incurred by military vessels), bookplate of P. H. Abbott.

A ‘new and enlarged’ edition of Samuel Rogers’s The Pleasures of Memory, the work for which he is (perhaps appropriately) best remembered for. Originally published anonymously in 1792, ‘the two-part poem, written in elegant but relaxed heroic couplets, begins with a nostalgic tour around the village of Rogers’s childhood, and moves through various scenes to explore and illustrate the “associating principle”, of the faculty of memory. It concludes with a poignant invocation to Rogers’s dead brother Thomas. The child of Mark Akenside’s The Pleasure of Imagination and the parent of Thomas Campbell’s The Pleasures of Hope, it entirely hit the taste of the day. The Monthly Review praised the poem’s “correctness of thought, delicacy of sentiment, variety of imagery, and harmony of versification” … and Byron (perhaps Rogers’s most notable admirer) commented in a letter to Thomas Moore of 5 September 1813: “His elegance is really wonderful—there is no such thing as a vulgar line in the book” … By 1806 it had gone through fifteen editions, two-thirds of them numbering from 1000 to 2000 copies each’ (Oxford DNB). Not in Jackson.