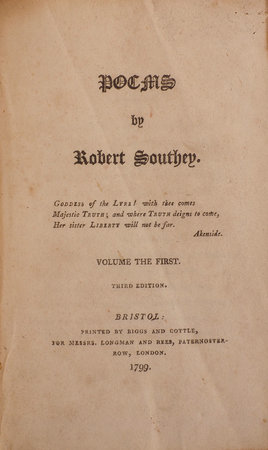 The third edition of vol. 1 (which had first appeared at Bristol in 1797) and the first edition of vol. 2, of this important collection gathering Southey’s early poetry, including ‘The Triumph of Woman’, ‘To Mary Wollstonecraft’, ‘Poems on the Slave Trade’, ‘The Genius of Africa’, ‘Botany Bay Eclogues’ and ‘A Ballad. Shewing how an old woman rode double, and who rode before her’, this latter based on a William of Malmesbury tale, and accompanied by a striking full-page woodcut (signed ‘M & W fecit’). Not in Jackson.