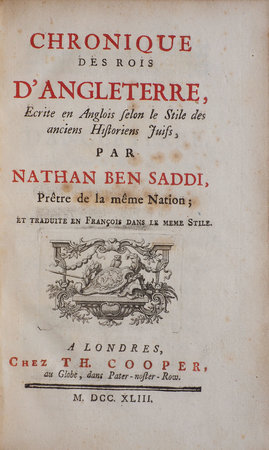 Probably the first edition in French—one of several issues of the same year with the same pagination but differing title ornaments. First published in 1740 as The Chronicle of the Kings of England under the pseudonym of Nathan Ben Saddi, Dodsley here displayed his egalitarian leanings with this rewriting of English history in the style of the King James Version of the Old Testament Pentateuch. The imprint is false and it is unlikely that the French editions were actually printed in London. In this issue the engraved vignette on the title-page is a frame with a pedestal upon which are a spear, a shield, laurel wreaths and an owl, there are several variants, as enumerated in the ESTC. Rochedieu, p. 88 (noting issues with both Londres and Amsterdam imprints).