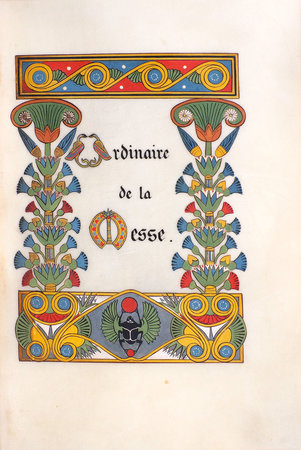 A superb illuminated manuscript decorated in a wide variety of styles, chronologically arranged, including Egyptian, Assyrian, Greek, Greco-Roman, Chinese, Indian, Persian, Arab, Byzantine, Carolingian, German, Celtic and European styles from the twelfth to the eighteenth centuries. The manuscript is unsigned, but is typical of the very best French revivalist artists of the period, who were often (but not always) women trained in ultra-orthodox Catholic religious houses. Leading binders such as Léon Gruel in Paris could call upon a wide range of talented calligraphers and artists for commissions such as this commemorative marriage book for Irma Lafontaine and Émile Brangeon (both born 1899 and married at Lourdes in 1929).