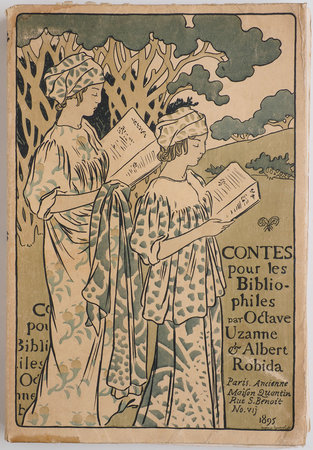 Large 4to (295 × 204 mm), pp. [iv], iv, 230, [2], plus 18 plates in various media, some coloured, numerous vignettes and other ornaments. Some foxing throughout. Original wrappers with illustrated dust-jacket by George Auriol. Slight browning, especially to the spine, some minor rubbing and creasing, upper hinge slightly loose, but actually a very good copy.

First edition. Jointly authored with Robida, who also provided the illustrations, Contes pour les Bibliophiles contains Uzanne’s prescient essay ‘La Fin des livres’. This remarkable text has been eagerly discussed by commentators on the interface between traditional and electronic book. Like many contempories Uzanne and Robida had been enthralled by inventions such as Edison’s phonograph and Ader’s ‘théatrophone’ and they predicted fundamental shifts in the consumption of literature in their wake. ‘La Fin des livres’ describes (and illustrates) wonderful devices for the consumption of audiobooks in the home and in public places, suggesting that they would become as straightforward as turning on a tap. The library of the future would in turn become a roomful of recorded cylinders, and publishers would be required to register the voices of their authors by way of copyright.

What would such a democratization of the word do to the printed book? Uzanne’s response was to look at current production of books and insist that books would not die provided they remained objects of beauty and desire worthy of the attention of bibliophiles. The wonderful cover illustrations and typography are by George Auriol, member of the Chat Noir circle and friend of Erik Satie.