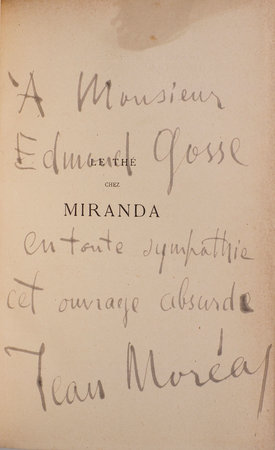 First edition, rare, inscribed by Moréas to Edmund Gosse, an important Symbolist novel. Greek-born Moréas who began as a Symbolist writer (he published a Symbolist manifesto in 1886 and was part of Le Chat Noir circle) and whose work was rooted in decadent aesthetics. Gosse met Moreas in Paris in 1893 during a week of absinthe drinking, presumably the occasion for the inscription here, and of the sketch by Dauphin Meunier of Moréas and Verlaine. He wrote to Heinemann on 6 April:

‘My week in Paris has been a great success, tho' quite unlike what I expected. We were mostly in the Latin Quarter, and I saw a great deal of the Symbolist poets. Mallarmé was ill, but all the rest, from Verlaine and Moréas downward, were on show, and they were extremely cordial to me’. Worldcat locates the Bn copy only (though there is a copy at the Taylor Institute, Oxford).