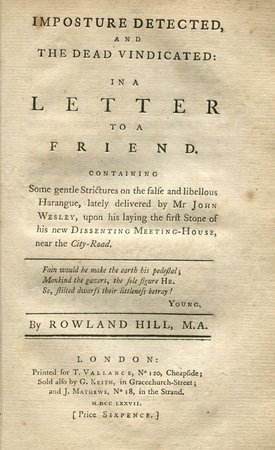 (WESLEY). HILL, Rowland. ~ Imposture detected, and the Dead vindicated: in a Letter to a Friend. Containing some gentle Strictures on the false and libellous Harangue, lately delivered by Mr John Wesley... London: for T. Vallance; sold also by G. Keith; and J. Mathews, 1777.

First edition, rare. John Wesley had delivered a sermon at the laying of the foundation stone of the Methodist mother church in City Road in April 1777. In this critical pamphlet the ‘gentle Strictures’ promised by evangelical preacher Hill on the title-page turn out to be vitriolic criticisms of Wesley laid out in 37 chapters, attacking his self-centred address. Chapter 31 takes issue with Wesley’s perfidy in his perceived encouragement of the American revolution in Free Thoughts on the Present State of Public Affairs, in which he had stated the the British government’s attitude towards the Americans’ could no longer be defended. ESTC: UK: Birmingham, BL, Congregational Library, Rylands (3 copies), US: SMU and Wesley Theological Seminary.