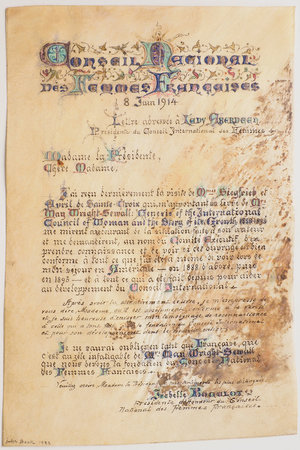 A calligraphic certificate by Julia Beck, being the copy of a letter of 8 June 1914 sent by a leader of the women’s movement in France, Isabelle Bogelot to Canadian feminist, Lady Aberdeen endorsing the new book by Indiana feminist, May Wright-Sewell, entitled Genesis of the International Council of Women (1914). It was written on behalf of the Conseil National des femmes françaises.

Calligrapher Julia Beck was born in Stockholm in 1853 and moved to Paris in 1883. She became one of the first female artists from her country to make a living through art alone. She is best-known for her landscape paintings in the Impressionist style, which were highly regarded in France and abroad, but she supported herself partly through commercial calligraphy, at which she excelled. She was a committed advocate for women artists.