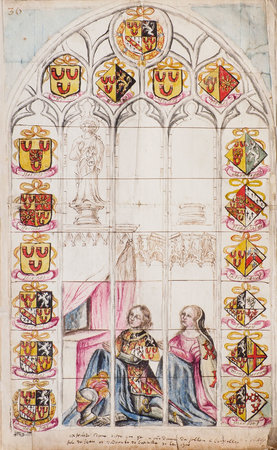 (POWELL, David, owner and compiler). ~ [Pedigrees of the most famous families of Belgium. Low Countires, sixteenth or seventeenth centuries, with later additions].

An elaborate antiquarian collection containing 19 large double-page armorials, apparently of the sixteenth century of the major families of Belgium, including Beaufort, Berghes, Egmont, Hornes, Lalain, Luzembourg, St. Aldegond, and including a number of members of the Order of the Golden Fleece. Each of these armorials bears detailed contemporary genealogies to their versos. These have been conserved by the British antiquary David Powell (?1772-1848) with other early genealogical material, his own notes and four large drawings of related stained glass, including a large window from the church of Notre Dame du Sablon (Brussels) and another in the hands of ‘Mr Whatson an eminent glazier Hanway Yard Oxford Street’ in 1816.

Born in Tottenham, Powell became a Lieutenant in the 14th Light Dragoons; he left a manuscript account of his 1794 experiences in Cork, Flanders and Brabant. He later entered Magdalen College, Oxford, receiving a B.C.L. in June 1805. He spent much of the rest of his life making heraldic and genealogical collections, and touring England and Wales to make watercolour sketches of churches and manor houses in over forty counties. He died in 1848, and his library was sold by Puttick & Simpson over three days. Many of Powell's manuscripts are now in the British Library.