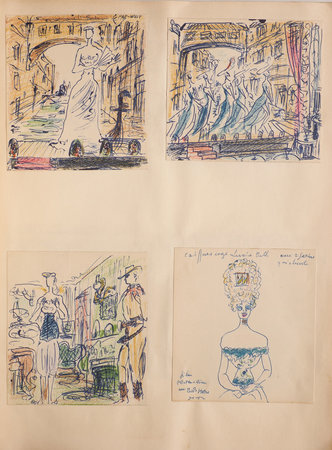 [SOUZOUKI, Ruytchi. ~ Sketches from the cinema and other entertainments. Paris, 1949-62].

c. 320 drawings in ink and ballpoint, some coloured, on notebook leaves, a few other cuttings, later (see below) mounted in 5 folio (320 × 240 mm) albums of 8 leaves each. Each album signed on upper covers. Some browning to the sketches, but generally very well preserved.

A superb collection of over 300 spontaneous sketches made in situ in Paris of popular films and entertainments of the 1950s, including the classics Les Vacances de M. Hulot, Buñuel’s El, Le Ballon Rouge and other French films by Renoir and Meliès, Sophia Loren in Neapolitan Carousel, Bob Hope and Lucille Ball in Fancy Pants, Jerry Lewis and Dean Martin in Artists and Models and Marilyn Monroe in Bus Stop.

Ryutchi Souzouki (1904-1985) had been a well-regarded and well-connected Montparnasse figure, counting Ernst and Foujita among his friends in the twenties and thirties and frequently exhibiting alongside the surrealists. Born in Yokohama, he spent much of his life in Paris, though his Japanese citizenship prevented him from exhibiting during the war years and probably accounted for his increasing isolation in the post war period. A solitary figure, until his death in poverty, he continued to work, experimenting with automatic drawing and making sketches, such as these, from popular films and entertainments, such as the tableaux vivants of the Casino de Paris, the Folies bergères, conjuring performances and the opera, instantaneously capturing their spirit on scraps of hotel stationery, recycled scraps or cheap spiral-bound notebooks. They are witty, touching and always engaging responses to what he saw in the cinemas and theatres of Paris. Following his death, the contents of his studio, including the many albums he had carefully collated in his final years (like ours) were conserved by his concièrge and dispersed at auction in 1985.