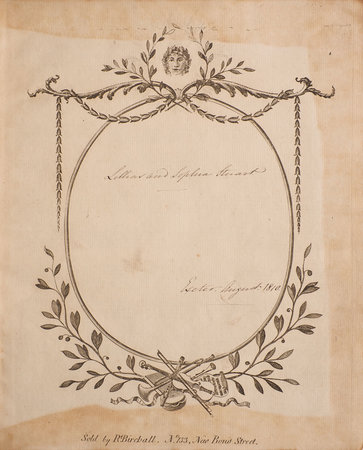 Manuscript on paper, 4to (270 × 223 mm), etched title-page with decorative border, lettered ‘Sold by Rt Birchall. No 133, New Bond Street’ at foot, with 94 unnumbered pages ruled with staves, small musical addition pinned to the foot of one page. Original(?) tree sheep, some offsetting from the turn-ins. Expertly rebacked.

An attractive manuscript illustrative of provincial musical knowledge and fashions at the beginning of the nineteenth century. Compiled by Lillias and Sophia Stuart, presumably sisters, the album contains setting for keyboard and voices, the latter rather charmingly often for two singers. The owners have copied here a variety of material, from church music to opera extracts, including works by Byrd, William Jackson (‘Jackson of Exeter’), Pergolesi, Cimarosa, Rauzzini, Dussek, Crescentini, Guglielmi, Andreozzi, Naderman, Mellish, Asioli, Blangini, Winter and Haydn (‘She never told her love’).

Birchall, named on blank etched title-page was a publisher and music and musical instrument seller, who traded from 133 New Bond Street from 1789 to 1819. Presumably one could also buy books such as this, ruled with staves and with a decorative blank title, for one’s own use.