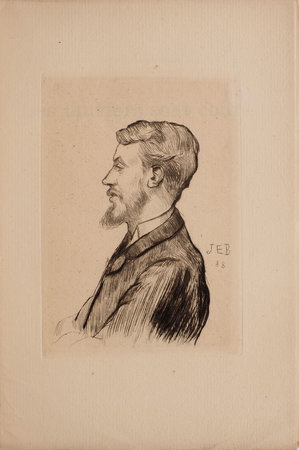 First edition in book form. One of 420 copies on vélin anglais mécanique. (The story was first published the preceding year in the Revue Indépendante). Hailed as the notable first ‘stream of conciousness’ novel and acknowledged by Joyce as a prime influence on Ulysses. Les Lauriers sont coupés follows the thoughts of a naive student, Daniel Prince who becomes enamoured by actress, Lea D’Arsay, a woman only interested in his money. As the plot develops Prince daydreams of eloping with D’Arsay and one evening, at her apartment just before they are about to take an evening stroll Prince falls asleep and dreams of his past, his parents and the first girl he fell in love with. The novel derives its name from a children’s song, Nous n’irons plus au bois (’We’ll to the woods no more’) and symbolises the withering of a laurel tree as the beginning of regrowth. Dujardin (like many Symbolists) believed music to be the utmost expression of a person’s interior monologue and was greatly impressed by Wagner and makes use of literary ‘Leitmotifs’.

With the author’s portrait by Jacques-Émile Blanche a self-taught artist widely known for his portraits of Proust Louÿs and Beardsley.