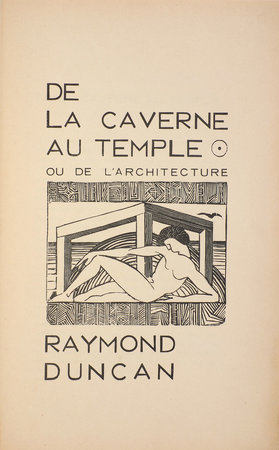 First edition. A lecture on architecture by Duncan (brother of Isadora Duncan). He was born in San Francisco but spent much of his life in Europe. He worked variously as a dancer, artist, craftsman, poet and philosopher and with his Greek wife Penelope Sekilianos, pioneered a holistic life-style based on ancient Greek principles. He founded a school based on authentic ancient Greek philosophy in rue de Seine and printed several works on his own handpress. He was a well-known Left Bank figure until his death in 1966, going about his work in Greek robes.