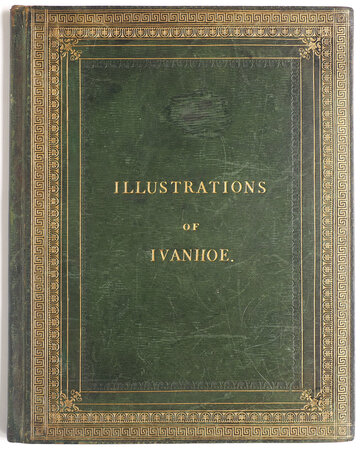 Small folio, 10 lithographs by Marcellin Jobard after Lagarenne (signed FL in the plate), featuring 21 characters from Ivanhoe, with printed captions below (and the actors names added in pencil); contemporary-hand-colouring, tissue guards; bound without the printed paper covers but with a folding ‘Programme de la Marche des Costumes’ bound in at the front (old repairs to the folds). Contemporary green straight-grain morocco, covers gilt with an elaborate border, lettered direct (‘Illustrations of Ivanhoe’). Edges and corners rubbed. Contemporary armorial bookplate of Joseph Ffeilden.

Sole edition of this rare suite of ten hand-coloured lithographs commemorating a ball inspired by Ivanhoe, held in Brussels on 5 February 1823 by the Prince and Princess of Orange in honour of the British community in that city. The ball was an early expression of ‘Scottomania’, and of the revival of interest in medieval pageantry, that occupied European high society following the publication of Ivanhoe in 1819. There were thirty-two guests at the ball, all attending in elaborate costume and dancing a special quadrille which became the talk of the town and remained ‘the principal topic of conversation at Brussels’ several months later (according to the The Repository of Arts, May 1823). The additional printed programme (not necessarily issued with the plates) tells us that Lord Danlo was Ivanhoe, while the Black Knight was played by Mr de Janti, and Mrs Berkley taking the role of Rowena. Further down the list is Mrs Fielden (sic), as Alicia, wife of the Joseph Ffeilden who owned this copy – she can be seen on the left in Plate VII. Jowers, Theatrical Costume 3126. COPAC shows copies at NLS, Edinburgh, and V&A. Worldcat adds Paris-INHA only.