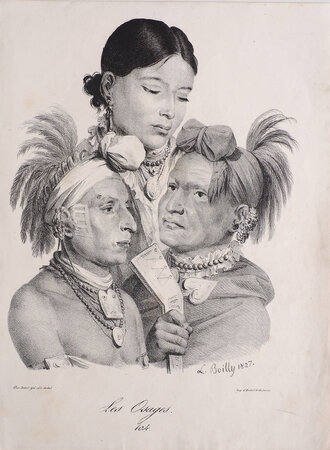 In 1827 members of the Osages Tribe from the Ohio River Valley in Arkansas and Missouri, travelled to Paris with Louisiana resident David DeLaunay. They were initially lionised by Paris society before being abandoned by their host and forced to fend for themselves. This celebrated lithograph shows Kihegashugah or Little Chief (age 28), Minckchatahooh or Little Soldier (age 22), and Grétomih (age 18 and cousin to Kihegashugah’s wife). It was issued as part of Delpech and Boilly’s Grimaces series (with three plates depicting the Osages) but was also issued separately, as here, without the captions found in the Grimaces version.