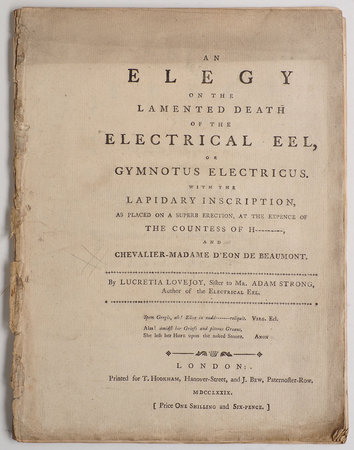 (PERRY, James, answer to). ‘LOVEJOY, Lucretia’, pseudonym. ~ An Elegy on the lamented Death of the Electrical Eel, or Gymnotus El ectricus. With the lapidary Inscription, as placed on a superb Erection, at the Expence of the countess of H---------, and Chevalier-Madame d’Eon de De Beaumont. By Lucretia Lovejoy, Sister to Mr. Adam Strong, Author of The Electrical Eel. London: T. Hookham, Hanover-Street, and J. Bew, Paternoster-Row, 1779.

A rare satirical elegy and epitaph for the celebrated electrical eel, who could no longer rise to the occasion. A reissue of the sheets of the first edition of 1777 with a cancel title, of this elaborate addition to the corpus of salacious 1770s pamphlets devoted to the subject of the electrical eel, a topic of serious scientific enquiry and popular merriment. This one continues the phallic joke and manages to draw in the hapless Chevalier D’Eon (whose sex was then popularly debated) alongside the lecherous Earl of Harrington.

‘If the Gymnotus Electricus, lately exhibited to the Public, be really dead, it is to be hoped that we shall have no more of these witty indecencies’ (Monthly Review, Nov. 1777). ESTC: Harvard and Princeton only worldwide of this issue. ESTC gives the pagination [4], 29, [1], but both the 2 copies reported have only pp [2] before title, as here, though it is perhaps likely the work was issued with a half-title or initial blank not present in surviving copies.