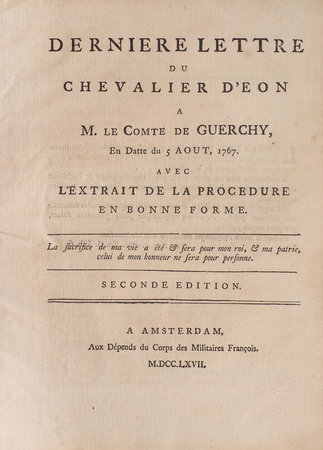 A notorious pamphlet by the famous transvestite spy, issued during one of the most colourful and tangled episodes of Anglo-French diplomacy. This ‘seconde’ edition issued at the expense of the corps des Militaire François in D’Eon’s defence. The first edition (also 1767) bore a Londres imprint and survives in only a handful of copies; our Amsterdam edition is even rarer with no copies located in Worldcat.

Following a successful military career d’Eon served Louis XV in English diplomacy and espionage from 1762, gathering defence intelligence for a projected French invasion. Living lavishly in London he became something of an embarrassment to his government who stopped his pension and sought to recall him to France. He became embroiled in a bitter row with his compatriot Claude Louis François Régnier de Guerchy (1715–1767), who he saw as an interloper on his diplomatic patch. ‘From October 1763 the dispute took a spectacular turn as d’Eon published allegations that Guerchy had tried to poison him. In March 1764, he went further still and published a selection of his diplomatic papers, which heaped ridicule on Guerchy and his allies in France’ (Burrows, A King’s Ransom). The dispute was a profound embarrassment to the French, not least because d’Eon successfully brought the matter to the English courts and because it drew attention to the chevalier’s increasingly complex personal life. It was in the wake of this affair that the chevalier went into hiding in Byfleet (Surrey), spending a years disguised as a woman and going by the name of Madame Duval. This transvestite experiment became a pattern and the remainder of his career was lived partly as a woman and he became a celebrated figure in London society.

This pamphlet, a superb piece of propaganda issued on d’Eon’s behalf appeared after the comte de Guerchy’s death in 1767 and reproduces the last letter sent to him by d’Eon recounting the facts of the poisoning case together with extensive translations from English legal records of the law case as it worked its way, very publicly, through the courts.