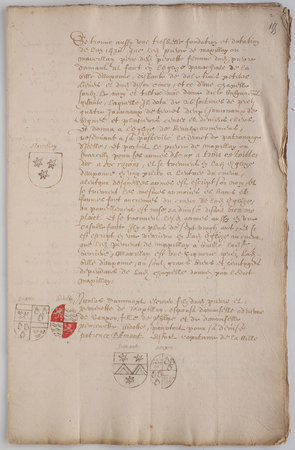 The narrative pedigree of a royal librarian: François Damant (c. 1535-1611) and his brother Nicolas (c. 1531-1616). François was Conseiller and Garde joyaux (i.e. keeper of the library) to the Duke of Burgundy, Philip II, King of Spain in the Netherlands and afterwards to his son Phillip III. His name appears in numerous manuscripts and records relating to the library and he was also a member of the Order of the Golden Fleece (Toison d’or) from 1587. He was son of Pierre Damant (1503-68), also of the Toison d’or and a royal librarian in his time. His brother Nicolas, who shares this pedigree was an official in the Habsburg government of Flanders and became Chancellor of Brabant and served Phillip II as a Councillor of State, Garde des sceaux and Garde joyaux, before (as is narrated in the pedigree) moving to Madrid when the centre of administration of the Austrian Netherlands moved there in 1698. The gruesome story of how and why he was granted two dogs (gros chiens) and a crown as part of his coat of arms is also related here in the context of a royal hunt (chasse du sanglier) in which a boar was killed by the royal dogs in his presence.

The pedigree also records the marriages of both brothers: François to Louyse de Sicleers and Nicolas to Barbara Brant, and each couple having several children. The arms of both wives are included in the pedigree besides those of their husbands, the women’s arms in oval cartouches, the men’s in lozenges. The same distinction is applied to the arms of their various male and female children listed in the pedigree.

The scribe uses a neat French secretarial hand for most of the document, changing to an accomplished italic for describing elements of the blazons, following contemporary practice. The manuscript is foliated in a contemporary hand, presumably by the scribe, in ink at the top right hand corner. A later pencil pagination suggests it was later included (either loose or bound) in a much larger genealogical collection. The paper is watermarked with a hunting horn stringed within a shield (similar to Briquet 7867, dated there to 1586). Lemaire, Bibliothèque royale. Mémorial 1559-1969.