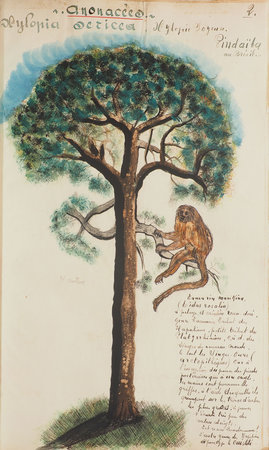 The life work of a Belgian natural history enthusiast, a massive and extraordinary collection of gathered knowledge, illustrated throughout with thousands of the author’s distinctive naive watercolours. The manuscript, in four volumes (one elephant folio, three folios), consists of complex visual arrangements of data which often extends over huge folded charts, each leaf filled to its maximum extent in neat manuscript in coloured inks. Though undated, it includes materials gathered in the period c. 1920-1943 and perhaps before, and in an inserted note, the otherwise unknown compiler describes the work of ‘most of my life’. It would appear to be the work of an amateur rather than an academic specialist, hence its striking originality as a work of popular science.

The large folio volume is really a huge collection of charts devoted to human anatomy, animal and plant biology, the fossil record and evolution (or transformisme). Botany makes up the largest proportion, but there are sections on insects, reptiles, birds, flying lizards, marsupials and mammals. Dumoulin also had an interest in Africa and there are sections on the Sahara and on the Belgian Congo. The focus is worldwide and is drawn from reference works rather than original research, but the arrangements are highly idiosyncratic. Several evolutionary charts are attempted, mentioning Linnaeus, Darwin, Lamarck and Jussieu.

The Dictionnaire botanique is a large 3 volume compilation mainly devoted to botanical classification, from the smallest mosses and seaweeds, to exotic flowering plants and forest trees. Like the larger folio volume, these volumes are illustrated throughout, with accompanying text in coloured inks and often containing emblematic figures of human figures appropriate to the origins of the plant: including Africans and Americans. They have apparently been bound from a large number of separate files (whose stiff paper cover with labels are preserved) each devoted to a different botanical family. The third volume contains additional materials at the end, including a study on Pasteur and germs, another on insects and another on bird classification. Like the preceding parts, these are also copiously illustrated in colour.

We have discovered almost nothing of Dumoulin himself, though various details place him in the French-speaking Walloon region of Belgium around Liège. He includes a couple of leaves devoted to Belgium, one with an interesting historical schema (including a memento of various gas attacks in the Great War). A couple of inserted letters are to Belgian academic scientists and one expresses Dumoulin’s hope that his work would end up at a University. The cover of largest volume bears various mottos, perhaps a personal credo: ‘La vie sans science est presque l’image de la morte, C. Volpi’, ‘Chercher. Comprendre. Vouloir. Pouvoir. Oser. Sentir. Méditer’, ‘Naître, mourir et renaître sans cesse, telle est la loi, telle est lavie. V. Hugo’ and ‘Travailler pour être estimé. Etre estimé pour être aimé. Etre aimé pour être heureux’. The wooden stand suggests an intention for display. Whether this was an elaborate teaching aid, or simply an almost-incredible recreation, is an open question.