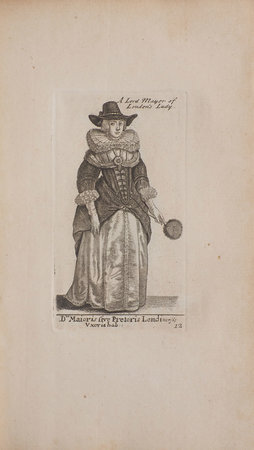 Hollar’s small format plates of European women and their costume are dated from 1642-4 and followed his successful series Ornatus muliebris Anglicanus of 1640. The plates were obtained by eighteenth-century printseller Robert Sayer, who issued them several times (with captions in English added) right up until his death in 1794. His widow may also have continued issuing and selling them into the early nineteenth-century. They are one of the best sources for seventeenth-century lay female dress and include several English subjects (A Noble Woman, a Merchant’s Wife of London, an English Gentlewoman, A Merchant’s Daughter, Lady of the Court, a Countrywoman etc) together with women of France, Ireland, Holland, Germany, Denmark, Belgium and Austria. Three of the plates at the end depict men of religious orders. cf. Colas 1466 (second edition of 1643); Lipperheide 30.