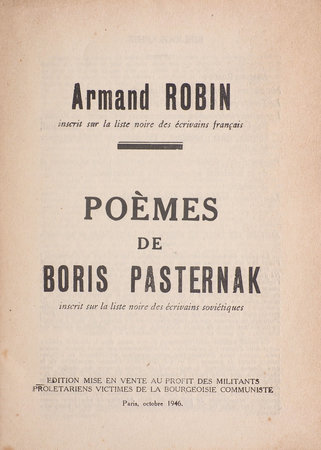 First edition of this collection, sold ‘au profite des militants proletariens victimes de la bourgeoisie communiste’. Poems by Pasternak who won the Nobel Peace prize in 1958, but declined it after enraging the Communist Party of the Soviet Union. The title page states that he was on the blacklist of Soviet writers. The translation is by Armand Robin, a poet, translator and journalist, who is also described here as being ‘sur la liste noire’ of French writers.