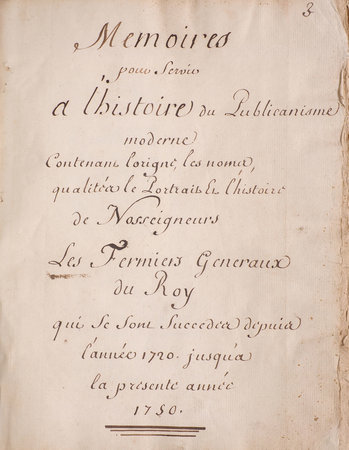 Manuscript on paper, 4to (230 × 175 mm), pp. 3-225, [1], [20] (the last blank, probably a wrapper pre-binding), wanting one leaf before title (formerly the upper wrapper?), plus pp. [8] table after title and an additional leaf after p. 13, p. 143 missed in contemporary pagination. Text in French, mainly in a single hand with slightly later additions on the added leaves. Uncut in eighteenth-century drab boards.

A lively collection of biographies of the unpopular Fermiers généraux – men responsible for collecting indirect taxation in ancien régime France. The Mémoirs pour servir l’histoire du Publicanisme moderne was never published in print but circulated widely in manuscript — its tone is familiar, ironic and sometimes scurrilous in its treatment of the careers of these powerful and wealthy men.

There are more than 100 entries including those for important cultural figures, Alexandre Le Riche de La Poupelinière (one of the prime-movers in the great Lafontaine edition of 1762 called the ‘Fermiers généraux’ edition), Charles Le Normant de Tournehem (guardian of Jeanne-Antoinette Poisson, future marquise de Pompadour) and the collector Pierre Grimod du Fort. Each entry provides a brief account of the sources of their wealth, of their families and progeny, and of their administrative capabilities (or otherwise). Morality is neverfar from the surface, and there are frequent grumblings of sexual infidelities. The biography for Le Riche de La Poupelinière (the longest in the collection) includes the anecdote of his being surprised in bed with an actress from the Opera, mistress of the Prince de Carignan and of the secret passageway from a neighbouring house through the firelplace, through which his lovers came and went.

The text mostly in a single hand of 1750. Each entry includes spaces left for the arms of the subjected, never completed). A second hand, perhaps not much later, adds notes, some additional biographies and tables. The book apparently existed for some time stitched in the simple wrapper of its first and last leaves before being bound, probably a little later in the century. French libraries contain several manuscript examples of this popular text.